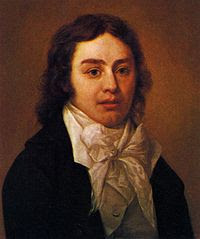 Samuel Taylor Coleridge was born in 1772. Together with William Wordsworth, he founded the Romantic Movement of poetry in England; his most famous poem being 'The Rime of the Ancient Mariner'. He wrote prose, his autobiography 'Biographia Literaria' providing much dispute between critics. Many saw it as the decline of his health, now specualted to be bipolar disorder, which he treated with copious amounts of opium. He died in 1834 and is regarded as one of the most important English poets.