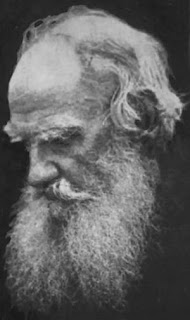 Russian realist writer Leo Tolstoy, died in 1910 at the age of 82. Descended from Russian aristocracy, he was described at university as 'both unable and unwilling to learn', and he left, amounting huge gambling debts and evenutally joining the army. Tolstoy's transformation into the literary talent he is recognised as today, occured during a trip to Europe, where he met Victor Hugo, author of 'Les Miserables'. Inspired, Tolstoy went on to produce some of the best known works of Russian literature, 'War and Peace', and 'Anna Karenina'; which he used to convey a realistic perspective of the Russian society in which he lived. He was praised by his contemporaries; Chekhov saying of him, 'What he does, serves to justify all the hopes and aspirations invested in literature.' Yet Tolstoy himself proved a harsh critic, telling Chekhov, 'I think Shakespeare's plays are terrible, but yours are even worse'. Indeed, Shakespeare was widely criticised by Tolstoy throughout his lifetime, Tolstoy confessing to feel 'an irrestitible repulsion and tedium' while reading his works. Alongside fellow writers Dostoyevsky, Chekhov and Pushkin, Tolstoy is considered part of Russia's golden age of literature.
Posted by Kathryn at 17:00