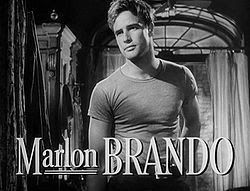 Tennessee Williams' 'A Streetcar Named Desire', debuted on Broadway in 1947. The cast included a young Marlon Brando and Jessica Tandy; the latter would go on to win a Tony Award for her performance. Despite its frank depictions of bith sex and violence, the production was hugely successful, running for over 800 performances; it is said that after a minute of stunned silence, the opening night ended with a round of applause lasting 30 minutes. It was from this role that Brando launched his hugely successful career, during which he achieved two Oscars and a further eight nominations; Williams was also honoured, receiving the Pulitzer Prize for Drama. The production was made into a film in 1951, featuring many of the original members of the stage cast. Williams, who wrote the screenplay, was asked to remove the rape scene but refused; leading the Catholic League of Decency to demand that Stanely must received due punishment, and so a rewritten ending sees Stella leaving Stanely. Rachel Weisz won a London Evening Standard Theatre Award for her depiction of Blanche DuBois in a recent production.
Posted by Kathryn at 16:46