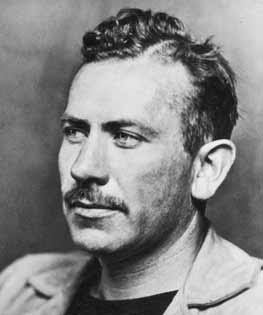 American author John Steinbeck, died in 1968 at the age of 66. Of both German and Irish descent, Steinbeck was born in Salinas, and used the location as the setting for many of his novels. The migrant workers which he encountered there, and the severity of such an existance, became prominent themes in his writings; intertwining with the Great Depression, which occupied much of his early life. Steinbeck's literary career is most notable for his so-called 'dust bowl' fiction; a sequence of induvidual novels based on the futilityof the American Dream for the common people. Of these, the most famous is 'The Grapes of Wrath', a Pulitzer Prize winner in 1940. Yet the novel caused outrage among some, for its negative representation of capitalism, and led to Kern County banning the book from public schools and libraries for two years. After a year as the World War Two correspondent for the New York Herald Tribune, Steinbeck returned to novels, producing such works as 'East of Eden' and 'The Pearl'. Steinbeck was award the Nobel Prize for Literature in 1962, for his 'realistic and imaginative writing'.
Posted by Kathryn at 12:26

Labels: John Steinbeck, Nobel Prize for Literature, on this day