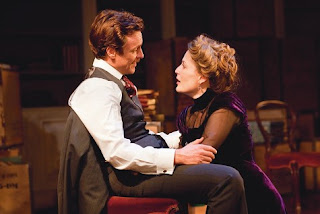 The first production of Henrik Ibsen's 'A Doll's House' opened in Copenhagen in 1879. Reflecting the ideology of its socialist writer, 'A Doll's House' is often described as a true feminist play, yet Ibsen himself later denies it was ever meant as such. The idea of female empowerment was not one which the patriarchal society of the day looked upon kindly, and Ibsen was forced to write alternative endings for his scandalised audiences. His later plays were received in a similar vain; 'Rosmersholm' called 'the brain-sick extravangencies of the Norwegian playwright'. Although held in contempt by many critics, Ibsen found an ally in English writer George Bernard Shaw, who greatly admired the Norwegian and even wrote a book in homage to him; 'The Quintessence of Ibsenism'. 'A Doll's House' has been a popular play to perform ever since; the most recent production was last year in The Donmar Warehouse and starred Toby Stephens and Gillian Anderson .
Posted by Kathryn at 19:21