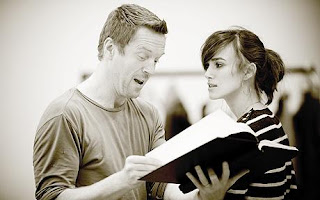 Keira Knightley is becoming the lastest actress to transfer her skills from screen to the stage. The 'Atonement' and 'Pirates of Caribbean' star will be making her debut next week in 'The Misanthrope; a French comedy of manners by the playwright Moliere. This comes on the back of several high profile performances by stage debutants, such as that of Lenny Henry; winner of a London Evening Standard Award for his portrayal of Othello. Sadie Frost, another recent convert to the theatre was nominated for a Whatsonstage.com Award for her performance in 'Touched'. Frost, who is going to watch the opening night, said of Knightley, 'she's a professional girl she'll just throw herself into it...I'm sure she's just enjoying it and getting on with it, and not focusing on what people think.' However Knightley herself seems to hold a different perspective, saying that she 'wanted to vomit'. The plays runs until March 13th, at the Comedy Theatre.
Posted by Kathryn at 17:59