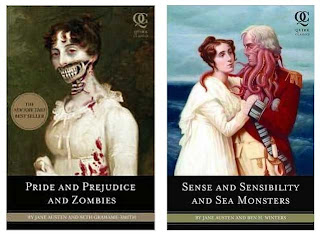 Quirk Classics, producers of 'Pride and Prejudice and Zombies', is set to release a new title. 'Andriod Karenina', based on the famous 'Anna Karenina' by Russian writer Leo Tolstoy, will be revamped to include 'a steampunk-inspired world of robotic butlers, clumsy automatons, and rudimentary mechanical devices'. The book will be co-authored by Ben Winters, who also wrote the 2009 release of 'Sense and Sensibilty and Sea Monsters'. This announcement follows close on the heels of the decision to produce a film version of the first title, which is confirmed to star Star Wars leading lady Natalie Portman. 'Murder at Mansfield Park' will also be released in the coming year.
Posted by Kathryn at 16:44