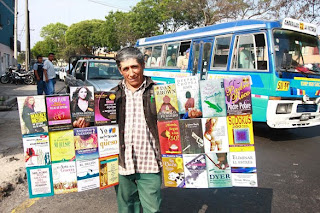 The West has pirated DVDs, the East music, yet Latin America seems to have a penchant for books. In Peru especially, the illegal book market at least equals its legal contemporary. The rise in such a trend is testament to Peru's thirst for knowledge; books being seen as the next stepping stone to increasing socioeconomic development. Yet in a country where a book costs approximately 20% of an average weekly wage, piracy is perhaps the only way to achieve this. Though, says on critic, such as crime has nothing to do with monetary circumstances, indeed, 'the same people who would never consider buying fake whisky think nothing of buying a pirated book. There’s no respect for intellectual production in this country'. From Stephanie Meyer to Dan Brown, no author escapes; some even succumbing before publication. Yet what must be most profound, it a country where people want to read, want to learn, want to advance, the National Library's fund remains constant: zero.
Posted by Kathryn at 20:10