You have your mother's eyes... 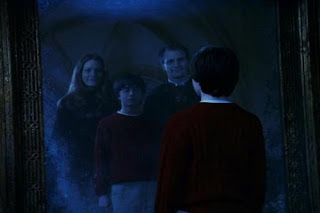 Another, slightly more light hearted anniversary is celebrated today; Lilly Potter's birthday. Mother of the famous Harry, her birthday is given as January 30th 1960 on her tombstone in the seventh and final installment of the literary series, 'The Deathly Hallows'. Muggle-born Lilly Evans, sister of Aunt Petunia, is described as an exceptionally bright student, with an aptitude for Potions and became prefect in her fifth year, and head girl of Hogwarts, in her seventh. Despite possible romantic interest from Snape, Lily instead married James Potter, with Sirius Black the best man at their wedding. The pair became highly successful members of the Order of the Phoenix, yet both were tragically killed as Peter Pettigrew informed Lord Voldemort of their hiding place. Lily's lasting contribution to the novel, is that of love. Standing in between Harry and Voldemort, she created a bond which rendered Voldemort powerless for eleven years. And of course, while bearing a great resemblance to his father, Harry has his mother's eyes.
Posted by Kathryn at 19:18