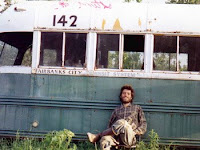 Christopher McCandless, subject of biographical work 'Into the Wild', was born in 1968. The child of rich yet argumentative parents, McCandless received a first class education and graduated from Emory University with a major in history and anthropology. Yet shortly afterwards, taking inspiration from writers Leo Tolstoy and W.H. Davies, McCandless began a quest for a period of separation, and, after donating $24,000 to Oxfam, set off.

Under the pseudonym Alexander Supertramp, McCandless travelled from his home in California and two years later found himself in Alaska. During the trip he had often little or no food or human contact, taking pride on survivng with the minimum amount of preparation and equipment. Ignoring advice to the contrary, McCandless set up camp in a abandoned bus with few supplies, believing that foraging and hunting, of which he had no skill, would be sufficient to support him. Yet racked with hunger and with no map to aid him, his body was found on September 6th 1992 weighing just 30kg. His journey is the subject no only of Jon Krakauer's book, 'Into the Wild', but also a 2007 film of the same name.
Posted by Kathryn at 18:52