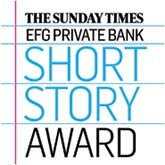 It is a long title, yet is one, conversely, rewarding succinctness of prose. Nominations for 'The Sunday Times EFG Private Bank Short Story Award', have been announced. Former glamour model, Kay Sexton, who used to pose for risque calenders before finding a talent in writing,is just one of 20 authors to be long-listed for the award. Perhaps unusually 6 of the names are actually award-winning poets, including  Jackie Kay and John Burnside. Indeed diversity seems to be a priority, with a gender split of 13 women to 7 men, ages from 28 to 78, and residences from New Zealand, America and Zimbabwe. The £25,000 prize will be awarded at The Sunday Times Oxford Literary Festival on March 26th.
Posted by Kathryn at 21:05