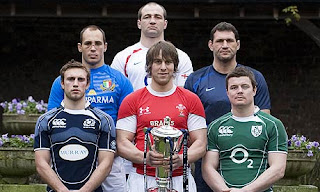 With the Six Nations kicking off today, it seemed an apt opportunity to take a look at the literature produced by these countries, which is some of the best in the world.

Italy - Starting with the Latin writings of Ovid and Tacitus, Italian literature spans an enormous period and is considered some of the finest. Continuing with Dante and his 'Inferno' in the Middle Ages and the sonnets of Petrach, modern Italian literature still remains in the form of the the late Italo Calvino and Umberto Eco.

France - Dumas, Flaubert, Zola, Proust; the list is endless. More so than other national literature, the French canon contains numerous philosophical works, the products of Camus, Jean Paul Sartre and Jean-Jacques Rosseau. Drama exists in the shape of Moliere, and France expressed an important voice in Roland Barthes.

Ireland - Irish literature really found its feet in the nineteenth and twentieth centuries. Bursting forth with the dual force of playwrights Oscar Wilde and George Bernard Shaw, Ireland's literary claim was strengthened through the poetry of Yeats and Goldsmith and its place cemented with the prose works of Joyce.

Wales - Although probably for many, the most famous Welsh writer is poet Dylan Thomas, the literature of Wales is far more diverse. No more so for the strength of works written in its own language, by authors such as William Owen Roberts. Many English writers such as Manley Hopkins have used Welsh subject matter.

Scotland - Scotland's most recent wave of literary tradition came in the Romantic era under the eye of Robert Burns and Walter Scott. Yet it was the Victorian era which propelled it into public eye, Robert Louis Stevenson, Arthur Conan Doyle and J.M. Barrie all becoming household names; Duffy now being the latest.

England - Possibly one of the richest literary histories, all that can be said for England is a list of names. The playwrights; Shakespeare, Marlowe, and Jonson. The poets; Milton, Keats, Shelley, Byron and Tennyson. The novelists: Hardy, Austen, the Brontes, Woolf, Dickens, Forster, Eliot and most recently, Rowling.

So there you have it. Competitors on and off the rugby field. Tradition not only in sport but in literature. Long may it continue...
Posted by Kathryn at 21:18