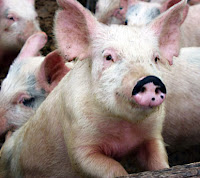 National Pig Day is celebrated, albeit on a small scale, in the U.S. The holiday first started in 1972, and lists it purpose as being, 'to accord the pig its rightful, though generally unrecognised, place as one of man's most intellectual and domesticated animals'. Events take place right across the country, including a parade, pig crafts, and, of course, the consumption of BLTs, chops and sausages. Pigs have, though maybe not as many as they deserve, several fictional representatives.

Perhaps the most famous, or at least most commercial, is Dick King-Smith's Babe, the protagonist of short story 'The Sheep-Pig'. Yet surely the most important is Napolean of George Orwell's 'Animal Farm'. Based on Stalin whilst named after Bonaparte, Napolean's role within the communist allegory, that of 'President of Animal Farm' - a corrupted dictator who exploits the other animals. On a less serious note, Piglet, is one of the most cherished children's characters, having featured in A.A. Milne's 'Winnie the Pooh'. Based on one of his son's stuffed toys, Piglet is generally timid, yet often conquers his fears. Pigs also feature in works by, Beatrix Potter, Terry Pratchett, and P.G. Wodehouse.
Posted by Kathryn at 16:41