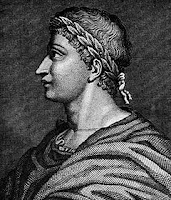 Roman poet Publius Ovidius Naso, better known simply as Ovid, was born in 43 B.C. The son of a rich family, Ovid was destined to practice law. Yet in his rhetoric training, Ovid, according to Seneca the Elder, instead dwelt on the emotions, and he renounced law in pursuit of poetry. Married three times and divorced twice by the age of 30, much of Ovid's poetry was centred on the theme of love. Indeed, one such collection of poetry, 'Ars Amatoria', a manual on seduction, is thought to have contributed to Ovid's exile in 8 A.D by the Emperor Augustus.

Ovid himself, gave the reasons to be a 'carmen et error', 'a poem and a mistake', yet what these are is not made clear. Conjecture centres around Augustus' daughter Julia, and her husband, both banished at the same time as Ovid, perhaps for indiscretions which he may have been party to. Ovid died in modern-day Romania 10 years after his exile, at the age of approximately 60. His best known work is epic poem, the 'Metamorphoses', written in hexameter in 15 books. Ovid's influence has entered many works of subsequent literary greats. Chaucer, Marlowe, Shakespeare and Milton are just a few of the names to have honoured the poet and surely many more will follow.
Posted by Kathryn at 20:03

Labels: classics, on this day