A pair of star-crossed lovers.... 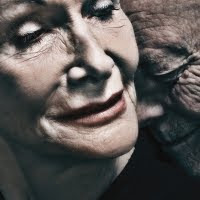 'Romeo and Juliet' is once again set to hit the stage in a radical modern retelling. Set in the 1980s, 'Juliet and Her Romeo' will be shown at the Bristol Old Vic from March 10th to April 24th. Both protagonists will be pensioners, whose love affair is hindered by their children, instead of their parents, due to its imprudent and costly nature. Directed by Tim Morris, who has just finished a stint on West End play 'War Horse', the play stars Sian Phillips as Juliet and Michael Byrne as Romeo. The play, and in particular the role of 76 year-old Phillips, was dicussed in a article on Newsnight yesterday, which can be viewed here
Posted by Kathryn at 20:02