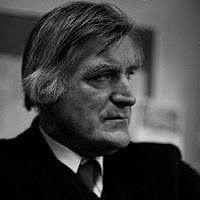 After much debate, wrangling and controversy, it has been announced that Ted Hughes will join those honoured in Poets' Corner. Westminster Abbey commerates literary greats from Shakespeare to Shelley, from the Brontes to Blake, with Hughes set to become the latest name. Although his ashes will not be re-interred, the former Poet Laureate's achievements, which include such works as 'Crow' and 'Birthday Letters', will be marked by a plaque from early next year.

However, the decision has not been without its protests. Critics cite the dark subject matter of much of his poetry, and the suicide of wife Sylvia Path and mistress Assia Wevill as reason enough to not see him sit aside perhaps slightly 'cleaner' writers. Yet you only have to examine each writer within their context to discover that few were what you may call 'ideal'. Perhaps it is only the rawness of Plath's death that still hangs over many. Whatever the reason, in centuries to come, all that will matter is that Hughes will be seated alongside Chaucer and Dickens, in the halls of literary greats.
Posted by Kathryn at 23:53