There is nothing half so much worth doing as simply messing about in boats... 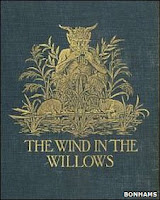 A rare edition of 'The Wind in the Willows', has been sold at auction for more than £30,000. Noted inside as 'to Foy Felicia Quiller Couch from her affectionate friend Kenneth Grahame, Oct. 1908', the book was given to a Cornish schoolgirl, whose father, Arthur Quiller Couch, is said to have been the model for the character Ratty. Indeed, it was whilst staying with Couch, that Grahame was inspired to write the novel, which originally took the form of letters to his son. Auctioned at Bonhams in London, the book vastly exceeded its £5,000 estimate.
Posted by Kathryn at 22:14