This above all: to thine own self be true... 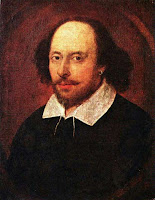 April 1st will see the release of a new book, sure to rouse literary discussion. James Shapiro's 'Contested Will: Who Wrote Shakespeare?', attempts to answer the century old question as to the 'real' identity of the mysterious bard. Advocates of the 'anti-Stratfordian' theory have included Mark Twain, Sigmund Freud and Charlie Chaplin, yet those whom they believe instead to be the playwright are an even more bizarre collection of people.

Christopher Marlowe, Sir Francis Bacon, Edward De Vere, Sir Walter Raleigh, John Donne, and, in quarters Elizabeth I, are all mentioned as possible writers, yet evidence is tenuous to say the least. Although all options are neatly summarised in Shapiro's latest contribution, perhaps it is best summed up by the name of one of the most prominent anti-Stratfordians - John Thomas Looney.
Posted by Kathryn at 20:22