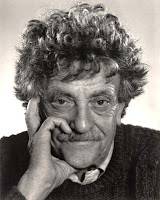 American novelist Kurt Vonnegut died in 2007, at the age of 84. Born to fifth generation German-American parents, his family founded the Vonnegut Hardware Company in Indianapolis. Vonnegut was accepted into Cornell University in 1940 and, despite majoring in chemistry, became associate editor for the student newspaper. While there, Vonnegut enlisted in the U.S. Army and so started an experience which profoundly affected him and his writings.

Chosen as the leader of the PoWs, due to his ability to speak some German, Vonnegut suffered what he called 'carnage unfathomable' in an attack which inspired novel 'Slaughterhouse-Five'. Awarded a Purple Heart on his return for a 'ludicrously negligible wound', Vonnegut spent the next few years in a variety of jobs, including working for 'Sports Illustrated' and the University of Iowa. It was during this time that Vonnegut began his writing career; a career that spawned such famous works as 'Cat's Cradle', 'Breakfast of Champions' and 'Mother Night'. Honorary president of the American Humanist Association, he is considered one of the most influential American writers of the 20th century.
Posted by Kathryn at 15:25

Labels: Kurt Vonnegut, on this day