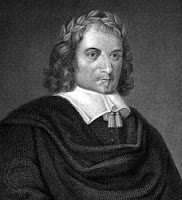 English dramatist Thomas Middleton was born in 1580. Considered amongst th greatest of Jacobean playwrights, alongside contemporaries Ben Jonson and John Fletcher, Middleton began his literary career by writing topical pamphlets, such as 'Penniless Parliament of Threadbare Poets'. At the same time, records courtesy of Philip Henslowe, show Middleton writing for 'The Admiral's Men', and unlike Shakespeare, he probably remained a free-lance playwright, able to write for whichever company provided the most money.

His early dramatic career was marred by controversy, as his friendship with fellow playwright Thomas Dekker started a long-running grudge with Ben Jonson, that found its way into several of Jonson's works, including 'The Staple of News'. Yet it was after 1603, the year in which the plague closed the theatres, that Middleton saw his most prolific writing era. Spanning a range of genre, such as tragedy, city comedy and history, Middleton's best known works include 'The Revenger's Tragedy', 'A Chaste Maid in Cheapside', and 'The Changeling'. Middleton also is said to have collaborated with Shakespeare on 'Timon of Athens', and revised both 'Macbeth' and 'Measure for Measure'.
Posted by Kathryn at 21:59

Labels: on this day, Thomas Middleton