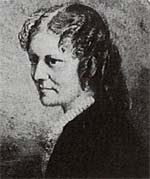 Anna Sewell, an English novelist, died in 1878, at the age of 58. Born into a devoutly Quaker family, Sewell's mother was in her own right a successful children's author. In accordance with her parent's strict religious convictions, Sewell was, for the most part, educated at home. Yet only two years after entering school, a slip severely injured both her ankles and, largely due to mistreatment, Sewell remained lame for the rest of her life and unable to stand without a crutch.

Seeking to improve her health, Sewell visited the sunnier climes of several European spas and during her travels, met numerous writers and artists to whom she had previously never been exposed. It was then that she began her only published work, 'Black Beauty' - 'it's special aim being to induce kindness, sympathy, and an understanding treatment of horses'. Written between 1871 and 1877, Sewell was often so weak that she had to dictate large passages to her mother, and later wrote the work on slips of paper to be transcribed. Sewell sold the novel to the publisher Jarrolds for £40, and it became the 'sixth best-seller in the English language'.
Posted by Kathryn at 20:44

Labels: Anna Sewell, on this day