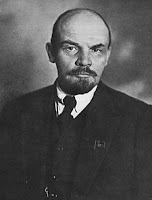 Vladimir Lenin, former leader of the Soviet Union, was born in 1870. A Russian revolutionary, Lenin headed the state in its initial years, between 1917 and 1924, and was also an accomplished political scientist, authoring numerous works on the subject. His extensive bibliography, a volume of 54,650 pages, comprises of pamphlets, articles and books, as well as correspondence with allies and friends world-wide. The most influential of Lenin's works, include, 'Imperialism, the Highest Stage of Capitalism', 'The State and Revolution' and '"Left-Wing" Communism: An infantile Disorder'. After his death, the USSR selectively censored his writings, removing any contradictions that existed between him, and his successor Stalin.
Posted by Kathryn at 19:11