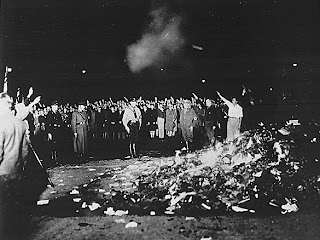 A series of book burnings were conducted by the Nazis in 1933. The campaign had been brewing since early April, when the German Student Association proclaimed a nationwide 'Action against the Un-German Spirit', which was to culminate in a literary purge. They gave as a basis for their actions, a desire for a 'pure' national language and culture, and a response to the Jewish 'smear campaigns', that had thus dogged the country.

Therefore, on the night of May 10th, students from all over the nation gathered on torchlit parades through the cities, accompanied by Nazi officials. The largest crowd was at Berlin's Opernplatz, where 40,000 people assembled to hear the words of Joseph Göbbel, as he declared; 'The future German man will not just be a man of books, but a man of character'. With these words, he began to cast books into the fire. Over 25,000 books were burned, including works of authors such as; H.G. Wells, Freud, Einstein, Hemmingway, Kafka, Lenin and London.
Posted by Kathryn at 18:39

Labels: history, on this day