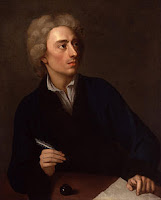 English poet Alexander Pope was born in 1688. The son of Catholic parents, Pope's education was affected by a penal law, stating that Catholics were not allowed to attend university, teach, vote or hold public office. Therefore Pope was taught to read by his aunt, and subsequently attended two illegal Catholic schools in London. Yet in 1700, Pope's formal education ended, and he took the task instead upon himself, reading classical epics such as Virgil and Homer, as well as English writers Chaucer and Shakespeare. It was at this age that Pope found himself severely affected by Pott's disease - an affliction that left him never taller than 4'6".

Perhaps unusually for authors, Pope found immediate success with his first publication, as his 'Pastorals' debuted in 1709. In 1711, after 'An Essay on Criticism', Pope, with writer Jonathan Swift, formed the satirical 'Scriblerus Club'. Much of his work was based around that of others, one of his greatest achievements being a translation of 'The Iliad' - an endevour that took him five years. He also published a new edition of Shakespeare, yet rewrote some of the verse, consigning about 1560 Shakespearian lines to footnotes, as he believed them to be so 'excessively bad' that Shakespeare could never have written them. However, his most famous work is undoubtedly 'The Rape of the Lock', a mock epic poem published in 1714. Pope, the third most quoted writer, after Shakespeare and Tennyson, died in 1774, at the age of 56.
Posted by Kathryn at 19:38

Labels: Alexander Pope, on this day