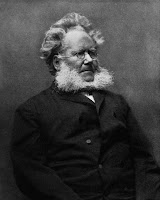 Norwegian playwright Henrik Ibsen died in 1906, at the age of 78. Shortly after his birth, Ibsen's parents, once wealthy timber merchants, suffered financial difficulties, leaving his father with severe depression - all circumstances frequently mirrored in his writings. Ibsen left home at the age of 15 to become an apprentice pharmacist, but an affair, illegitimate child, and failed exams later, he found his only solace to be in writing and published his first play, 'Catiline', in 1850. Inspired by Norwegian folk tales, Ibsen continued to produce unsuccessful works, whilst obtaining employment at 'Det norske' Theatre. However, the failings of his career, and disenchantment with his circumstances led him to seek self-imposed exile with his wife in Sorrento, and indeed, he did not return to his home country for the next 27 years.

Arguably his first taste of literary success, came in the shape of 'Peer Gynt', to which Edvard Grieg later composed music, yet it wasn't until 1879, and the emergance of 'A Doll's House', that Ibsen really came to widespread public attention. Thus followed a string of highly controversial plays; 'Ghosts', 'A Enemy of the People', 'Hedda Gabler', and 'The Master Builder', which explored perspectives on such themes as marriage and morality, that were considered scandalous at the time. Yet Ibsen has subsequently received high praise, inspiring names such as Chekhov and Shaw, and being labelled the 'godfather' of modern drama.
Posted by Kathryn at 18:19

Labels: Henrik Ibsen, on this day