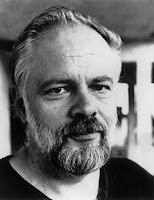 The journals of popular sci-fi writer Philip K. Dick, are to be published next year. Titled, 'The Exegesis', the journals contain descriptions of 'visions and auditions' he said that he experienced. The writer, who died at the age of 53 in 1982, was famous for such works as 'The Man in the High Castle' and 'Do Androids Dream of Electric Sheep?'. His novels also provided the basis for many successful films, including 'Blade Runner', 'Total Recall', and 'Minority Report'. The journals will be released in autumn 2011.
Posted by Kathryn at 19:33