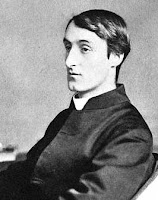 Victorian poet and Jesuit priest Gerard Manley Hopkins died in 1889, at the age of 44. The first of nine children, Hopkins' father, once the British consul general in Hawaii, was himself a poet, writing titles such as 'A Philosopher's Stone'. At the age of 10, Hopkins was sent to boarding school, and, interested in pursuing asceticism, he betted that he could go without drinking for a week - apparently persisting until his tongue became black and he collapsed. As a classics scholar at Oxford, Hopkins became acquainted with prominent writers if the era, such as Robert Bridges, Walter Pater and Christina Rossetti, and began to create his own works, converting to Catholicism along the way.

However, in 1868, having resolved to become 'less religious', Hopkins burnt all of his poetic writings on a bonfire, and hardly wrote again for seven years. Alternating between teaching and study, Hopkins was moved to take up poetry again after being asked by his religious superior to create a work commerating a naval disaster. Hopkins went on to create a number of highly celebrated poems, including such titles as 'Pied Beauty', 'As Kingfishers Catch Fire', and what came to be known as the 'terrible sonnets'. Hopkins became especially known for his invention of the sprung rhythm, a unconventional metre inspired by works such as 'Beowulf'.
Posted by Kathryn at 20:32