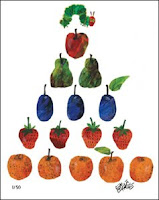 Children's author and illustrator Eric Carle was born in 1929. The son of German immigrants, although Carle was born in New York, by the age of six he was living in Stuttgart, going on to graduate from the famous 'Akademie der bildeneden Künste'. Yet it was the global events of the time that were to most shape his future, as World War Two left his father, eight years a Russian prisoner, as a 'sick man, psychologically, physically devastated', and Carle himself suffered post traumatic stress disorder from being forced to dig trenches on the Siegfried line.

It was America which always felt like home, and thus he returned to the country in 1952, in possession of only $45, and became a graphics designer for the 'New York Times', later gaining the postition of arts director inan advertising agency. Indeed, it was an advert containing a red lobster that signified the start of Carle's career, as Bill Martin, impressed by the work, asked him to illustrate 'Brown Bear, Brown Bear, What Do You See?', an immediate bestseller. His first completely original book, '1,2,3 to the Zoo', was soon followed up by what was to become Carle's defining work - 'The Very Hungry Caterpillar'. His distinctive art style is heavily influenced by the use of collage.
Posted by Kathryn at 19:14

Labels: Eric Carle, on this day