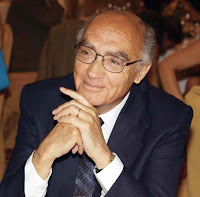 Nobel Laureate Jose Saramago died yesterday at the age of 87. The Portuguese author, 'known almost as much for his unfaltering Communism as for his fiction', moved to Lanzarote in the early 1990s following a clash with the right-wing government of the day, and it was there that he died having published last novel 'Cain', at the end of 2009. Famous for his unorthodox use of syntax, Saramago's best-known novel is 'Blindness', in which the entire population lose their sight. Citing him as an author who 'with parables sustained by imagination, compassion and irony continually enables us once again to apprehend an elusory reality', Saramgo was honoured with the Nobel Prize for Literature in 1998.
Posted by Kathryn at 14:12