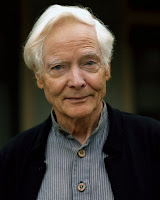 America's new Poet Laureate has been announced as W.S. Merwin. The 82-year-old, twice winner of the Pulitzer Prize, will follow in the footsteps of poetic greats Robert Frost and Elizabeth Bishop when he assumes the role later this year. In the 1960s, feeling that he wished his poems to 'evoke the spoken language', Merwin decided to stop using punctuation, one of a series of stylistic features that make his works so different, and thus so brilliant. The head of the Library of Congress's poetry and literature centre even compares Merwin to Wordsworth, stating them both to have been 'passionately interested in the natural world', adding that his works possess a 'nourishing quality'. Merwin himself, who confesses usually to 'like a very quiet life', will assume his post in October for a year, taking over from current holder Kay Ryan.
Posted by Kathryn at 18:37