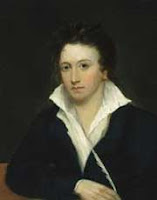 Romantic poet Percy Bysshe Shelley died in 1822, at the age of 29. Born to a Whig Member of Parliament, Shelley's early childhood was one of contentment and reasonable prosperity, as he received primary education and engaged in such activities as fishing and hunting. Although his literary works show a blossoming and sharp intellect, such rigour was seemingly lacking from his education, as his performances at boh Oxford and Eton fell short of desired results. His first work was gohic novel, 'Zastrozzi',  a genre that was to be much progressed by future wife Mary and her 'Frankenstein'.

However, it was 16-year-old Henrietta Westbrook with whom Shelley eloped in 1811, moving their household to the Lake District for writing. However, three years and a child later, Shelley grew steadily more unhapy in his marriage, falling in love with another 16-year-old Mary Wollstonecraft Godwin. and the two eloped to Switzerland. Perhaps best depicted as the 19th century's version of a Hollywood golden couple, the two famously took part in a meeting with Byron at Lake Geneva, after which followed a period of some of their best works, including  'To a Skylark', 'Adonais' and 'A Defence of Poetry'. Also a close friend to John Keats, it is said that when Shelley's body was found, after he had drowned, a book of Keats' poetry was discovered in his pocket.
Posted by Kathryn at 16:00