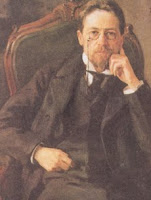 Anton Chekhov's body was interred in Moscow's Novodevichy Cemetery in 1904, according to the Julian calendar. Chekhov had died on July 4th in the German spa town of Badenweiler and was said to have retained his customary wit, drained a glass of champagne on his deathbed after pronouncing his death in German, of which he knew next to none.

Chekhov's body was then transported to Moscow, in a refrigerated railcar marked 'fresh oysters', leading to outrage on the part of fellow writer Maxim Gorky who said that 'Anton...squirmed at anything vile and vulgar'. Similar confusion followed at his funeral, which, after a 4 mile procession of the casket across Moscow escorted by over 4,000 people, got mixed up with that of an army general and so many of mourners were accompanied by a military style band. Chekhov is buried next to his father.
Posted by Kathryn at 17:21

Labels: Anton Chekhov, on this day