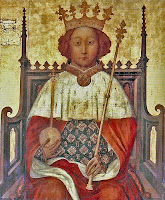 English writer Geoffrey Chaucer is named chief clerk of the king's works in 1389. Appointed by Richard II, Chaucer's role was to upkeep and repair governmental buildings, with some of his projects including Westminster Palace, St. George's Chapel, Windsor, continuing to build the wharf at the Tower of London, and building the stands for a tournament held in 1390. Paid two shillings a day, a decent sum for the time, Chaucer was robbed and possibly injured a year later whilst conducting business, and it was then that he stepped down from his post. It was around the time of this particular job, or shortly before, that Chaucer began to write his magnum opus 'The Canterbury Tales'.
Posted by Kathryn at 17:31