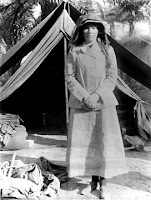 English archaeologist, traveller and writer Gertrude Bell was born in 1868. Born into a prestigious family, her grandfather was a Member of Parliament under Disraeli, and his involvement in policy-making sparked her interest in international politics. It is for her contribution in this field, that Bell is best known, particularly for her work with T. E. Lawrence, later Lawrence of Arabia, eventually earning the title of 'Oriental Secretary'.

Fluent in Arabic, Persian, French and German, Bell was one of the crucial players in helping to found the independent state of Iraq, and she later established the Baghdad Archaelogoical Museum, in which she placed relics from Mesopotamian civilisations and the Babylonian Empire. Bell articulated much of her travels in writing, producing such works as 'Persian Pictures', 'Syria: The Desert and the Sown' and 'A Thousand and One Churches', all of which highlighted the beauties of th Middle East to the vastly ignorant Western world. Bell died on 12th July 1926, at the age of  57 from an overdose of sleeping pills - the cause of which is still unknown.
Posted by Kathryn at 18:01

Labels: Gertrude Bell, on this day