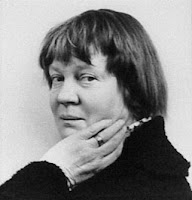 Irish-born British author Iris Murdoch was born in 1919. Raised initially in Dublin, Murdoch moved to London at a young age, leaving behind her sheep-farming ancestry to graduate in Classics, ancient history and philosophy at Oxford. It was while at university that she became a member of the Communist Party, joining future Labour politicians such as Denis Healy. However, in order to secure a job at HM Treasury, she left - the party's aims also beginning to conflict with her own burgeoning philosophical views.

So involved was Murdoch in her academia, that it wasn't until 1954 that she wrote her first novel, 'Under the Net', yet she then went on to produce a further 25, finding inspiration from the likes of Shakespeare, Eliot and Dostoevsky. Her most famous works include Booker Prize Winning 'The Sea, the Sea', and 'A Fairly Honourable Defeat', which was recently on the long list to win the Lost Man Booker Prize of 1970. Named as one of 'The 50 greatest British writers since 1945', Murdoch's work is well-respected both at home and abroad. She died in 1999, at the age of 79.
Posted by Kathryn at 14:01

Labels: Iris Murdoch, on this day