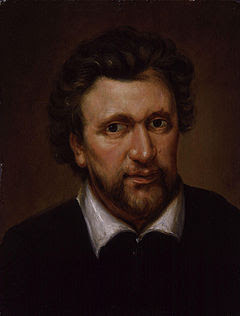 British playwright Ben Jonson was indicted for manslaughter in 1598. During a duel on Hogsden Fields, Jonson killed fellow actor Gabriel Spenser and was subsequently incarcerated in Newgate Prison for a short while. It was the wit and intelligence shown so frequently throughout his works, that ensured Jonson managed to escape punishment.

Using a loophole-ridden Tudor law, Jonson was able to claim 'benefit of the clergy', by reciting Psalm 51, commonly known as the neck-verse, and thus was able to stand trial in the far more lenient ecclesiastical courts. In order to make sure that Jonson was not able to claim such rights for a second time, his left thumb was branded.
Posted by Kathryn at 20:07

Labels: Ben Jonson, on this day