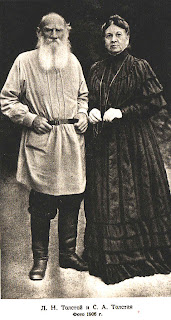 Russian author Leo Tolstoy married Sophia Andreevna Bers, the daughter of a court physician, in 1862. At the age of 34, Tolstoy was almost double the age of his 18-year-old bride. The evening before their wedding, Tolstoy is reputed to have given Bers his diaries detailing an extensive sexual past and a son born to the one of his serfs. The first few years were seemingly hapy ones, and during the course of their marriage Sophia bore him 13 children, 5 of whom later died.

These were some of the most literary productive years of Tolstoy's life, and Sophia acted as his secretary, proof-reader and financial manager, whilst he wrote masterpieces such as 'War and Peace' and 'Anna Karenia'. Yet marital bliss was not to last forever, and Tolstoy's spiritual adventures left the relationship in tatters. He attempted to give away all the rights to his works, yet his wife managed to salvage the copyright for all works published before 1880. As Tolstoy became increasingly radical, Sophia is reported to have carried out hysterical attempts to starve and drown herself.
Posted by Kathryn at 19:37

Labels: Leo Tolstoy, on this day