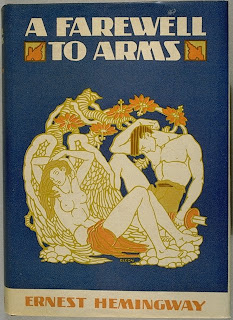 Ernest Hemingway's 'A Farewell to Arms' was published in 1929. Serialised in Scribner's magazine from May to October of that year, the semi-autobiographical novel took its title from a 16th century George Peele poem. The plot is formed from Hemingway's World War One experiences, focusing on indivual tragedy to accentuate the futility of the war as a whole, and thus perhaps offering a cynical commentary on American patriotism.

Yet writing the ending to the novel was not an easy process. Unhappy with his work, Hemingway sent off his manuscript to F. Scott Fitzgerald, who sent back 9 pages of revisions with the comment, 'our poor old friendship probably won't survive this but there you are...'. Hemingway's response was to write on the bottom of the page, 'kiss my ass'. The novel has been adapted for the screen twice, in 1932 and 1957 respectively.
Posted by Kathryn at 16:40

Labels: Ernest Hemingway, on this day