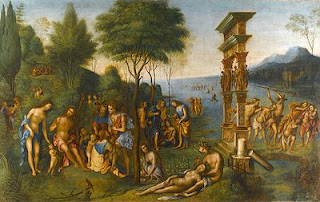 John Milton's 'Comus' was first performed for the Earl of Bridgewater in 1634. One of only two dramas that Milton wrote, the masque outlines the themes of good and evil, later explored in his masterpiece 'Paradise Lost'. Some see this as the Puritan Milton attempting to reclaim the genre for more virtuous purposes than it had otherwise been used during the Elizabethan and early Jacobean eras. The performance of 'Comus', based on the Greek god of festivity and revels, was given at Ludlow Castle in honour of the Earl's new position of Lord President of Wales, and many of the parts were acted by Bridgewater's own children.
Posted by Kathryn at 19:09

Labels: John Milton, on this day