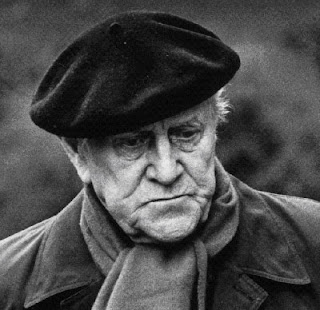 Australian writer Patrick White died in 1990, at the age of 78. An ill boy, White was unable to join in with many of the fun and games that form childhood, ensuring instead, a highly developed imagination. He was never particularly close to his parents, and was sent to an English boarding school at the age of 12, allowing him to explore all the delights of the London theatrical scene. After attempting to pursue a career working on the land back home, White decided to stay in England, studying French and German literature at Cambridge, and using his father's inheritance to begin writing and publishing.

His literary exploits were briefly halted during the war, where he joined the RAF and met life partner Manoly Lascaris, a Greek army officer. Yet his work soon began gaining national recognition, and he won two Miles Franklin Literary Awards, declining a further one, was named Australian of the Year, and in 1973, became the first Australian to win the Nobel Prize for Literature. In typical fashion, White used the money to found his own literary prize, the Patrick White Award, which honours those who have not yet gained any real recognition for their years of literary service. This year, his novel 'The Vivesector' was shortlisted for the Lost Man Booker Prize of 1970.
Posted by Kathryn at 14:46