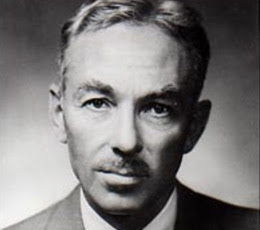 American writer E.B. White died in 1985, at the age of 86. The youngest child of a piano manufacturer, White served in the army before going to Cornell University and working as editor of the student newspaper. After graduating, White went on to write for the national press, becoming a sports journalist for 'The New York Times', before turning his hand to children's fiction on behalf of his neice.

White did not produce many famous works, yet the two he did, are widely considered classics. 'Stuart Little' was published in 1945, and 'Charlotte's Web' was written 7 years later, the two jointly receiving the Laura Ingalls Wilder Medal in 1970 for lasting contributions to children's literature. White was given further recognition for his works, winning an honorary Pulitzer Prize in 1978 and the Presidential Medal of Freedom in 1963.
Posted by Kathryn at 18:27