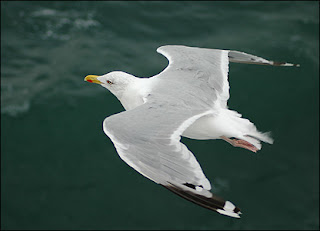 Anton Chekhov's 'The Seagull' premiered in St. Petersburg in 1896. Although he admitted during its creation that he was 'flagrantly disregarding the basic tenets of the stage', Chekhov did not expect the play to flop in the manner in which it did. The hostile audience intimidated Vera Komissarzhevskaya, widely regarded as one of the best actresses in Russia, and she lost her voice.

By Act Two, in a desperate attempt to escape from the booing and jeering, Chekhov was hiding backstage and when he emerged at the end of the play, he declared, 'not if I live to be seven hundred will I write another play'. Yet in spite of its disastrous opening, 'The Seagull' soon became a resounding success, being performed at the Moscow Art Theatre, and receiving praise from names such as Vladimir Nemirovich-Danchenko and Maxim Gorky. The image of a seagull is now among one of the most famous literary avian motifs, joining Coleridge's albatross, Keat's nightingale, and Poe's raven.
Posted by Kathryn at 17:04

Labels: Anton Chekhov, on this day