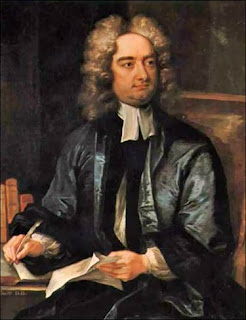 Irish writer Jonathan Swift died at the age of 77, in 1745. Born in Dublin, the Glorious Revolution forced Swift to move to England in 1688, and he soon became the personal assisstant to a high ranking diplomat, Sir William Temple. After several years, which included being introduced to King William III, Swift returned to Ireland, only to come back to England on account of ill-health - now known to be Meniere's Disease.

From then on, Swift barely settled in either, before uprooting to the other. As well as becoming ordained, Swfit attempted to establish his literary career, and formed part of the Scriblerus Club, alongisde names such as Alexander Pope. Although Swift's themes became increasingly morose, his most famous work is undoubtably 'Gulliver's Travel'.
Posted by Kathryn at 19:05

Labels: Jonathan Swift, on this day