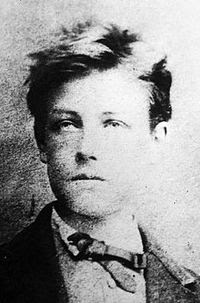 French poet Arthur Rimbaud was born in 1854. The child of a soldier, Rimbaud was raised by his mother from an early age, as his father, growing irritated by domesticity, fled the household. However, influenced by her strict Catholicism, she ruled her children with an iron fist, reportedly depriving them of meals if they failed to recite hundreds of lines of Latin verse correctly. An extremely gifted boy, Rimbaud's first poem, 'Les Etrennes des orphelines' was published in 1870, and he continued to write under the tutelage of Georges Izambard - a new teacher, who became his literary mentor and a great friend.

Yet shortly afterwards, the Franco-Prussian War broke out and Izambard left, leaving Rimbaud in a a state of despondency. His behaviour started on a downward spiral, and he began to drink heavily, steal books from local shops and become unkempt. A short but eventful affair began with Paul Verlaine, during which the two lived a lifestyle of absinthe and hasish in the poverty of London and ending with Verlaine shooting Rimbaud twice. Although he gave up writing at the age of 21, Victor Hugo described him as 'an infant Shakespeare', and his best known works include, 'Le bateau ivre' and 'Lettres'. Rimbaud died in 1891 from cancer, at the age of 37.
Posted by Kathryn at 17:05

Labels: Arthur Rimbaud, on this day