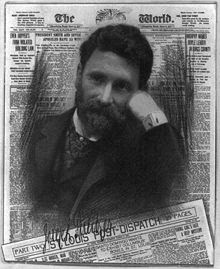 Hungarian journalist Joseph Pulitzer, died in 1911 at the age of 64. The son of the 'foremost merchant' in Mako, Pulitzer enjoyed a prosperous childhood, receiving private tuition and learning French and German. Yet after the death of his father, the family went bankrupt, and Pulitzer attempted to enlist in several European armies before emigrating to the U.S. Following his participation in the Civil War, Pulitzer worked a number of odd jobs, including being a mule hustler and a waiter, before his first journalistic piece was published in the 'Westliche Post'.

He became an American citizen in 1867, and two years later was chosen and elected as a Republican member of the Missouri State Assembly, despite being three years under the legal age. However, a decade later, disgusted by GOP corruption, he switched to the Democrat party. By now a highly successful editor, Pulitzer purchased a variety of newspapers, including the 'Post', 'The St. Louis Dispatch', and 'New York World' - increasing the circulation of the latter by 40 times. Pulitzer's legacy has been cemented in establishing the world's first school of journalism, and the famous Pulitzer Prize.
Posted by Kathryn at 11:08