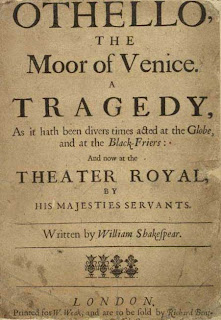 Two of William Shakespeare's best loved plays had their first recorded performance - 'Othello' in 1604, and 'The Tempest' in 1611. Both were performed at Whitehall Palace, and although it is conceivable that this was not the plays' debut performance, it is certainly the first that was documented.

'Othello' was noted as, 'A Play in the Banketinge house at Whit Hall Called The Moor of Venis' and was attributed to 'Shaxberd'. 'The Tempest' was similarly performed in front of King James I on Hallowmas night, and was later included as one of the eight plays acted at court in celebration of the marriage of Princess Elizabeth.
Posted by Kathryn at 18:16

Labels: on this day, Othello, The Tempest, William Shakespeare