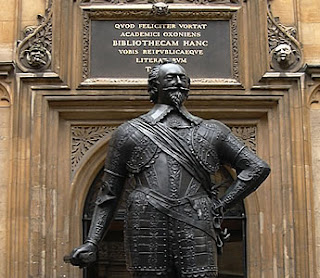 The Bodleian Library at Oxford University was officially re-opnened in 1602. One of the oldest libraries in Europe, the late 16th century had seen it enter a period of decline, resulting in both furniture and books being sold off. It was not until the appearance of wealthy retired diplomat Thomas Bodley, with the promise to 'take the charge and cost...to reduce it again to his former use' that the institution began to get back on its feet.

The library's collection rapidly expanded, encompassing the varied interests of its benefactor, and sourcing manuscripts from the likes of Turkey and China. Following an agreement signed with the Stationer's Company in 1610 to obtain a free copy of every book published, the building was expanded twice in the next thirty years. It was this agreement that led the Bodleian to become one of Britain's six legal deposit libraries and so contain over 80 miles worth of material.
Posted by Kathryn at 18:04

Labels: libraries, on this day