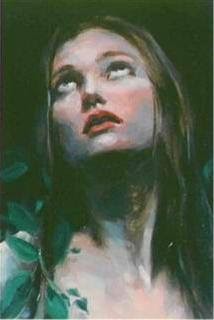 Percy Shelley's first wife Harriet Westbrook killed herself in 1816, at the age of 21. Five years earlier, Westbrook, the daughter of a tavern owner, had eloped with a 19-year-old Shelley to Scotland to get married, but any happiness was short-lived. Before three years were out, Shelley had abandoned pregnant Westbrook and their young child to begin an affair with Mary Godwin, who would later become his second wife.

Distraught by her loss, Westbrook committed suicide, drowning herself in the Serpentine in Hyde Park, leaving a suicide note addressed to her sister and Shelley. In it she expressed her traumatised mental state:'I could never be anything but a source of vexation and misery to you all.... too wretched to exert myself, lowered in the opinion of everyone, why should I drag on a miserable existence?...I never could refuse you and if you had never left me I might have lived, but as it is I freely forgive you and may you enjoy that happiness which you have deprived me of'.
Posted by Kathryn at 17:24

Labels: on this day, Percy Shelley