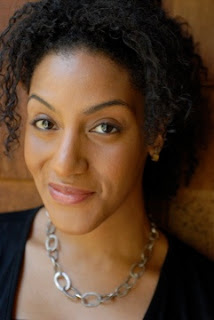 On this day...American playwright Sarah Jones was born in 1973. The daughter of an African American father and a mother of mixed Euro-American and Caribbean descent, Jones' diverse background has lead her to being labelled a 'multicultural mynah bird [who] lays our mongrel nation before us with gorgeous, pitch-perfect impersonations of the rarely heard or dramatize'.

She had originally planned a career as a lawyer, but soon found herself competing in small poetry slams at the Nuyorican Poets Cafe. Soon after her solo debut, Jones found herself the subject of numerous commissions, many to do with the presentation of immigrants and racial issues. With works including 'Bridge & Tunnel', 'Women Can't Wait!' and 'Waking the American Dream', Jones has won both a Tony and an Obie Award. She has recently become an Ambassador for UNICEF and their first ever official spokesperson on violence against children.
Posted by Kathryn at 21:27

Labels: on this day, Sarah Jones