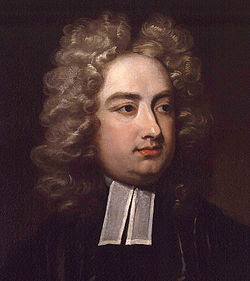 On this day...Irish writer Jonathan Swift was born in 1667. Much of Swift's childhood is unknown, save that he attended Trinity College, Dublin, before being forced to leave for England in 1688 on account of the Glorious Revolution. There, under the tutelage of Sir William Temple, Swift entered political negotiations with the King, before dissatisfaction, and the onset of Meniere's disease, led him to becoming a priest.

Come the 1700s, Swift was becoming increasingly active on both the political and literary scenes. He was part of the innner circle of the Tory government, acting as a mediator for Prime Minister Robert Harely, and writing several pamphlets, including 'The Conduct of the Allies'. Yet Swift is best known for his fictional works, and after forming friendships with the likes of Alexander Pope and John Arbuthnot, he became a core part of the Scriblerus Club. A writer of all genres, Swift was a prolific author, his prose works compiling fourteen volumes and his poetry a further 950+ pages. Swift's most famous work is 'Gulliver's Travels', but he is also known for 'A Tale of a Tub' and 'A Modest Proposal'. Swift died in 1745, at the age of 77.
Posted by Kathryn at 19:51

Labels: Jonathan Swift, on this day